The pair of peregrine falcons that nested for the first time in Woluwe-Saint-Pierre in 2014, has spawned three falcons this year!

The family is installed on top of the red brick tower, which dominates the town hall. At a height of 65 meters, the peregrine falcons overlook one of the greenest parts of Brussels: the many ponds of the Woluwe valley, the tens of thousands of acres of centenary beech of the Sonian Forest, the priory of the magnificent domain of Val Duchesse, the 65 hectares of the Woluwe park. The territory of this couple is much less urbanized than that of the peregrine falcons of the cathedral. And while the days of the falcons in the Cathedral are divided by the regular chimes of the bells, the falcons in Woluwe-Saint-Pierre are accompanied daily by a carillon.

The male of this pair is ringed, which allows us to determine his age and origin, provided we can read the code with the telescope! This was done on March 15th of this year by a diligent observer. It turns out it’s the same falcon that nested there last spring. He was hatched in April 2012, in the church of St. Antonius of Etterbeek, one of the other 19 municipalities that are part of Brussels. The nest contained three falcons, and it was the first time a couple of peregrine falcons nested on this building.

The female of Woluwe-Saint-Pierre is not ringed, just like last year. It’s probably the same female, but this is not certain.

But back to the events in Woluwe-Saint-Pierre in 2015. The adult couple was frequently observed in winter, either on the tower, or circling above the Woluwe park. On March 24, the female was brooding on 3 eggs. In 2014, she laid 2. On April 20, the family was expanded with three falcons of 265, 269 and 310g, respectively. These values were used to determine that they were older than ten days. This means that they probably hatched on April 8th, exactly the same time as at the cathedral. The hatching took place a week later than in 2014. This is probably due to the fact that it’s an inexperienced couple.

To observe this new nest, a temporary observation post will be installed in front of the town hall of Woluwe-Saint-Pierre, on the Avenue Charles Thielemans 93, and this on Wednesday, April 29th from 16h30 to 18h00, and on May the 6th, 20th and 27th, during the same hours. Observations with a telescope, as much information as you want, and the ability to photograph the falcons with a smartphone or digital camera through the telescope. Everyone is welcome! 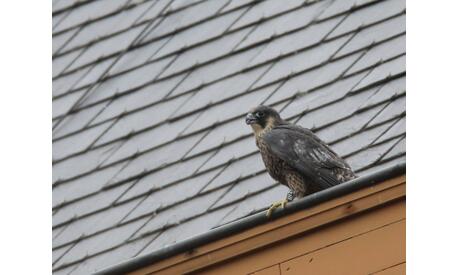 Male of W-S-P, leaving his nest at the St.-Antony of Etterbeek church on 2/6/12 (DV)
View the photos in large format
Top