The family Peregrine Falcons living in the bell tower of Saint Job Church of Uccle has four chicks now! All the eggs therefore successfully hatched. There will be 36 hours between the appearance of the first and the last chick. This classic delay can be explained by the fact that Peregrines start incubating the eggs as soon as the penultimate egg is laid.

Feeds now occur at regular intervals. Every 2-3 hours, the newborn falcons are delicately fed by their parents with tiny titbits. Most of the time, it is the female who feeds them, but it is not always her. The male can also come over and feed the chicks. Over the years of observation, it has been observed, among others at the Cathedral of Brussels, that this behavior changes in function of the individual. Some males are more present than others. Some females are more aggressive than others.

The video attached to this blog shows the male Peregrine of Uccle bringing prey to his female. He does not enter the nest, but waits for his partner to come over to receive his capture. She gently raises up from the four chicks she was brooding, and grabs it: a song thrush. This one is not at all deplumed, which is rather rare. Normally indeed, the father or mother Peregrine plucks the prey partially (or whole) in order to be able to more easily and quickly butcher it to feed the chicks.

It is perfectly clear that it is a song thrush: the cream-coloured chest well speckled with brown and the pale underside of the wings are characteristics of the species. The male leaves and the female start to feed her four falcon chicks one after the other. The meal will last 12 minutes in total. After feeding, the obligatory step is the elimination of the carcass of the prey. The female therefore emerges from the nest and leaves her falcon chicks alone for a few moments.

During the first days, the chicks are very sensitive to temperature. They must be kept warm by their brooding parents and when they are alone for a few minutes, but no longer at this age, they huddle together, so much that it is almost impossible to count them (try it, there is a picture next to the blog!).

Four eggs and four chicks in Uccle! Next step: the Cathedral of Saints Michael and Gudula in the center of Brussels. The new couple that settled there this spring has been incubating 4 eggs since mid-March. The end of the incubation is therefore near. Hatching is expected over the weekend. Patience! 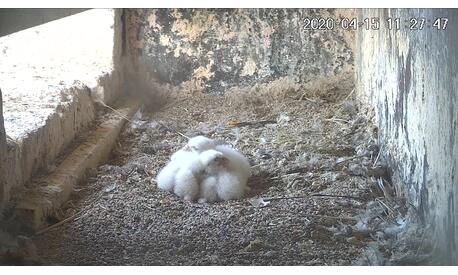