The ULB Peregrine female has been reproducing in Brussels since 2019. The ring she’s wearing bears witness to this! She was born in April 2014, in the Netherlands, near Maastricht. She is therefore 7 years old.

We don't know how many eggs she laid in previous springs. But this year, thanks to the installation of the camera, we were able to observe, in all discretion, that she was incubating 5 eggs.

Normally, a Peregrine Falcon clutch has 3 or 4 eggs. Five is therefore a lot, even exceptional! But maybe not that much after all. Since 1994, 17 broods of 5 eggs have been observed in Belgium. This is obviously a minimum, as in most cases the total number of eggs laid is not known. Indeed, we absolutely avoid disturbing the brooding falcons.

Has the frequency of 5-egg clutches increased in recent years? Or is it more important in Belgium than in the neighboring regions? Difficult to know because observations are a function of effort. The more we observe, the more we have the "chance" to discover phenomena that are out of the normal range. Indeed! In Belgium, Peregrines have been under close surveillance since their return in 1994, while Peregrine pairs have been filmed since 2005. We are therefore more likely to observe clutches of 5 eggs than we did in the past or do in other regions.

Moreover, unlike nocturnal raptors, the total number of Peregrine eggs laid does not dependent on the number of available prey, on the "quality of the biotope". It is apparently the "genetic quality" of the female that influences the number of eggs laid. And indeed, of the 17 clutches of 5 eggs that have been reported in Belgium so far, 4 have been from the same female. Who then? The Peregrine female of the cathedral of Saint-Michael and Saint-Gudula in the Center of Brussels. Of course! She was the one that nested so successfully between 2006 and 2018. In 2010, 2013, 2016 and 2018, this bird of Germany laid 5 eggs each time. Moreover, she was 16 years old in 2018!

But there is also another factor that could explain the under-detection of 5 egg clutches: the fact that an egg disappears during incubation. Brooding 5 eggs is not easy for a Peregrine, such a clutch represents a famous volume that must be covered and reheated. For the male, much smaller than the female, the task is certainly very complicated. With some risk of accident. And that's what happened at the ULB. An egg was damaged on the morning of 04/26/2021, probably by the male that we observed to leave the eggs at 12:31 in photo 1. We can then distinguish a somewhat sunken egg (photo 2). The enlargement of photo 3 makes it possible to distinguish the problem on the egg located at the bottom left. At 13:32, the female returns to incubate the eggs (photo 4). She is also the one who broods on the night of March 26-27. She looks nervous, turning around on her eggs again and again. Photo 5 shows that she has a wet beak, with several small chippings adhering to it. Not at all normal. At 07:33, on March 27, she left the nest to relay for the male (photo 6). It's clear: the egg is broken and she has eaten it ... The male comes to brood immediately (photo 7). An hour later, the female takes over (photo 8) in the meantime, the empty shell is in pieces. Three days later, the existence of the fifth egg can only be inferred from a small piece of shell that remains in the nest (photo 9). The next day, there is no trace of a fifth egg left.

It's not all that, but when will the ULB Peregrines hatch? This should already have happened if you add 32 days of incubation to the brooding start date. So we wait! However, this morning, the female Peregrine refused the male Peregrine to relay her on the eggs. This is probably (a good) sign! 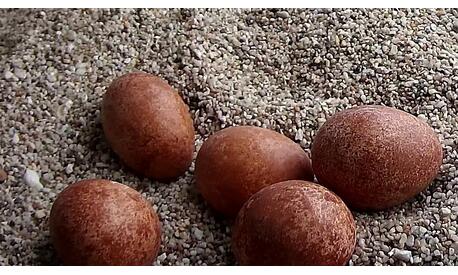 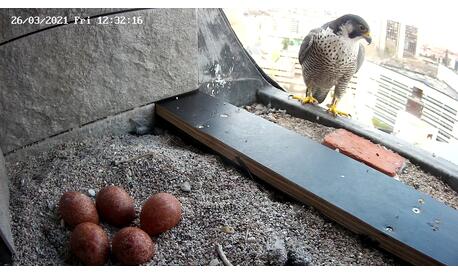 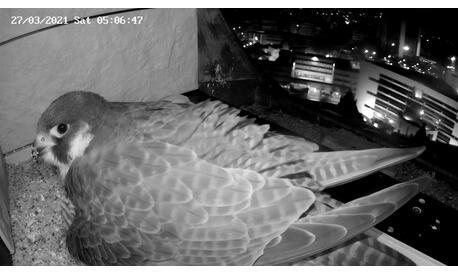 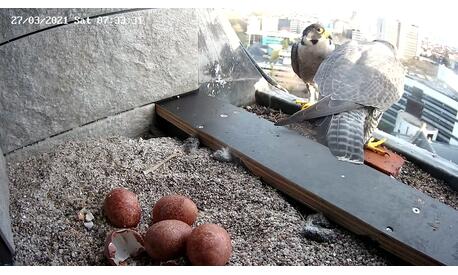 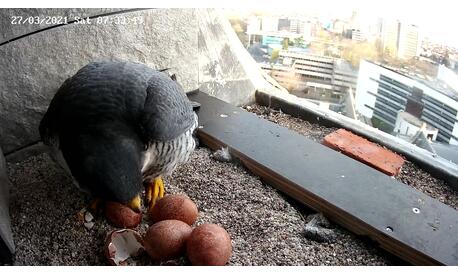 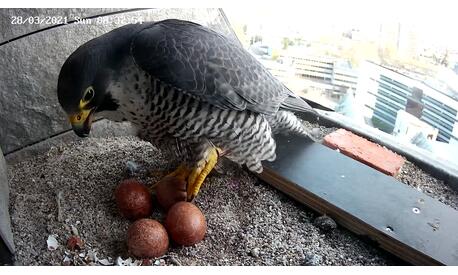 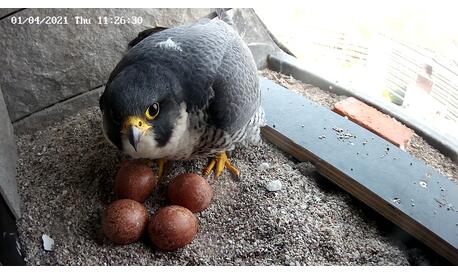