A 2019 falcon from Uccle in pair in Laeken

The previous blog presented the ringing video of Uccle in 2019, as we were unable to film the 2020 operation. Take a close look at these images: the filmed falcon is marked with a metal identification ring from the Royal Belgian Institute of Natural Sciences on the right leg, and a white ring engraved with a code composed of 2 characters separated by a white line on the left leg. This second ring allows identification from a distance, by telescope or on photo. It is therefore not necessary to recapture the falcon for identification; nor should you wait until he is found somewhere dead before getting information of him. The code of the ring is K /3.

This type of double marking is only used for specific programs. In the case of the Peregrines in Belgium, the main aim is to observe and monitor the annual survival rate of the birds in order to sound the alarm bell in time (!) if the population should decrease alarmingly. Additional objective: to observe where the young peregrines will finally settle for nesting. This is also of great importance for monitoring the population. A species, a population, will be less at risk if individuals disperse over a distance. This allows a certain genetic mixing and facilitates recolonization in the event of local disappearance. In other words, a small population, moreover isolated, is very often much more vulnerable than a population which is distributed over the continent. Logica!

And it is this K / 3 falcon, born on April 9, 2019 at Saint Job church who was spotted at Notre Dame church in Laeken, in the northern part of Brussels! The distance is not impressive between the 2 sites, barely 9 km, but it is the circumstances of this observation that are remarkable!

It is a passionate nature guide, Henri Jardez, who spotted this Peregrine on April 22. In fact, he photographed it while parading over the Royal Crypt. Of course, he was not parading alone. Facing him, a well-known female, since she has been breeding in Laeken since the spring of 2016. The regular identification of her colored ring (orange) made it possible to know that she was born in the Netherlands, in Terneuzen, in spring 2014.

A male Peregrine from Uccle, immature since he was born last spring, is therefore in a relationship with the female who has been nesting in Laeken for years now. But how is this possible? Information intersects and completes! Indeed, the male who had been nesting for several years in Laeken with the Dutch female was found in perdition on March 30, in the immediate vicinity of the church. Ouch! He was identified by his ring, which revealed that he was born in spring 2013, in Olen (province of Antwerp), on an industrial chimney. Despite immediate care by Dr Marchand, a veterinarian from nearby the church, and then by his colleague Nathalie Lemmens and the teams of the Royal Belgian League for the Protection of Birds; he did not survive . Sad news on the one hand. But happy news on the other hand to note that the female of Laeken did not remain long alone! It was not possible to visit the church of Laeken to find out if nesting had been initiated. To be continued!

One last thing, look at the plumage of the male falcon photographed by Henri Jardez. It can be seen that it differs from that of adults: it is brownish on the back and not gray, the chest is streaked with brown and not barred with grayish. In fact, it still has its falcon plumage as we observed it last spring after leaving the nest at Uccle. The difference is explained by the fact that the feathers were discolored and damaged under the effect of sun and friction. During the summer, the falcon will renew all of its feathers and therefore moult towards the plumage of a magnificent adult Peregrine. 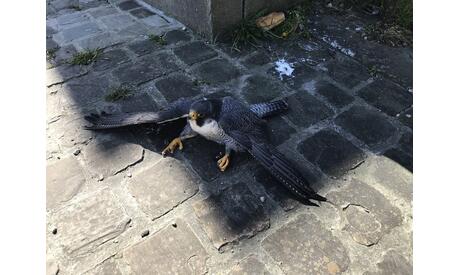 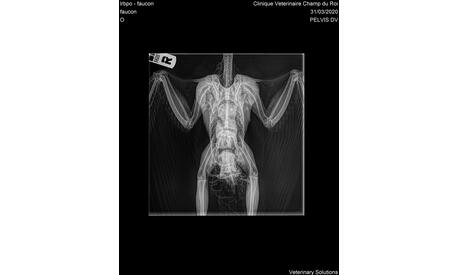 Radiography of the Laeken breeding male found in perdition. No fracture was detected, the causes of death are unknown (photo Clinique Vétérinaire du Champ du Roi). 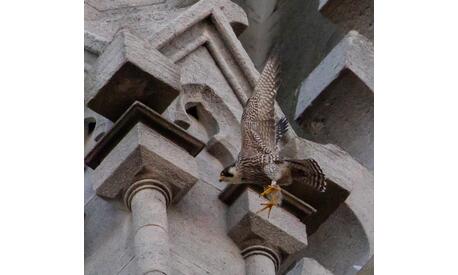 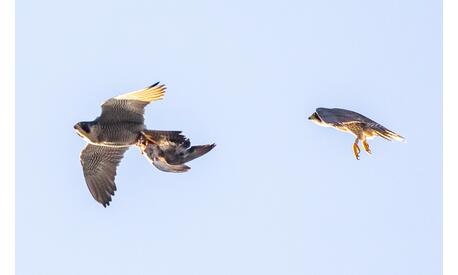 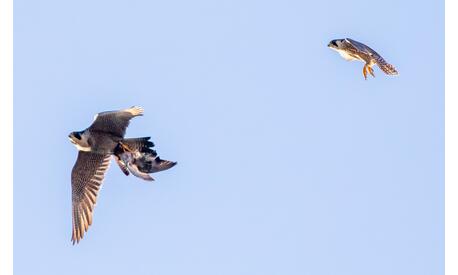 continuation of the aerial parade between K /3 born in Uccle in spring 2019 and the local breeding female (photo Henri Jardez). 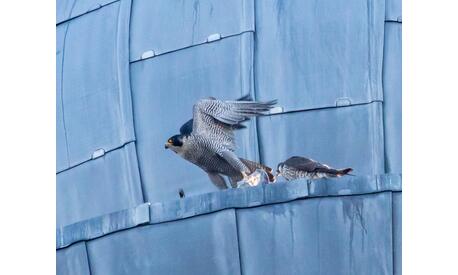 04/22/2020, the adult female takes off from the dome of the Royal Crypt, the male is on her right. We can clearly see the difference in plumage between adult and immature (photo Henri Jardez).
View the photos in large format
Top