A 2020 falcon chick of Uccle nests in Saint Gilles

The Ucclean Peregrine brood from last year consisted of 2 females and 1 male. Big surprise: the latter was spotted yesterday, perched on the tower of the Town Hall of Saint Gilles, one of the 19 municipalities of Brussels. How could we identify him? Thanks to the letters and numbers on his ring; through the telescope while he was perched at the entrance of the nest!

This young Peregrine therefore didn’t settle at a great distance from his native nest since barely 3.5 km separate the two sites. Obviously, no one says he did not cover hundreds of kilometers, in the mean time, before coming back to Brussels!

But what is this young falcon up to in Saint Gilles? He nests! He breeds when he is barely one year old. This is very exceptional! Normally, a Peregrine Falcon is not mature until the age of 2. Hence, this doesn’t mean he will automatically start nesting at that age! Most often it isn’t the case. So far, in Belgium only one observation was recorded of a one-year-old breeding male Peregrine. A falcon that was born in the Meuse valley in 2002 nested between 2003 and 2008 on the famous site of the rocks of Marche-les-Dames, about 10 km down the river.

Immature falcons can be recognized having a different plumage than the adults. This acts probably as an indicator for mature territorial Peregrines: "look at my plumage, I am immature, I am not a competitor". No need to fight! In fact this immature plumage, you know it well. It is neither more nor less than the juvenile plumage which is observed as the young falcons fledge. OK, not completely the same ... the action of UV has indeed degraded the colors of the feathers in the mean time. So the beautiful chocolate brown on the back has turned to a dull brown. While the beige edging, is getting rusty, the color of the feathers of the breast, the pants, the backside, have faded and are now beige-yellow, lacking luster.

The young Ucclean falcon is paired to a non-ringed female adult. So we don't know where she comes from, or how old she is, but we know that ... she is not the same as the one that nested in Saint Gilles for the past 4 years. The latter female had been ringed on a natural cliff in the beautiful valley of the Semois, at the borders of the provinces of Namur and Luxembourg.

We may conclude that the two partners of the Peregrine pair from Saint Gilles of 2020 have altered. Astonishing!

And what is happening now in the nest of Saint Gilles? Well, the pair have been incubating three eggs for at least two weeks. The exact date is not known as the site is not (yet) under video observation. The question is whether these eggs will hatch or not? A pair is made, that’s for sure. Two partners are incubating, that's a fact. But are the eggs fertilized? We obviously don't know; we will have to wait a maximum of 3 weeks to observe the outcome or not ... Hence, it would be the first time that chicks hatch in Saint Gilles because none of the broods observed since the arrival of a pair of Peregrines in Saint Gilles ever had hatching falcons. 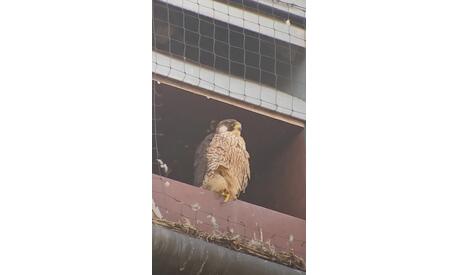 The plumage of an immature Peregrine is very characteristic (photo DV) 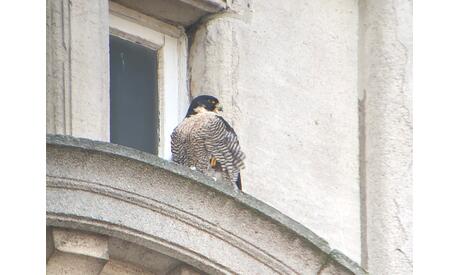 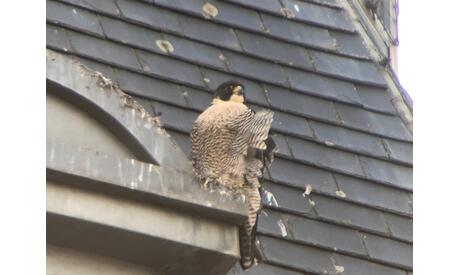