In Uccle, the chicks are now 11 days old. Their mother starts leaving them alone for prolonged periods. Alone? Not quite because if you visit them at Place Saint Job, you will probably easily see the female, perched on the bell tower or on the weather vane. She stands guard. Beware of those who try to approach the nest. He would be violently attacked! At ULB, on the other hand, the female still covers permanently her chicks. They only are 4 days old, so no way to let them cool down. They wouldn't survive.

Whether in Uccle or at ULB, the falcon chicks now spend most of their time sleeping and ... eating. In fact, at this age, they only have these two activities. As they evolve, they will begin to move, to do muscle exercises, to interact. But that is for the next few weeks.

Meals are provided either by the female or by the male. It depends on the individual. At ULB, the male frequently comes to feed his chicks while the female partly covers them. That’s rare! Most of the time, male and female peregrine just cross each other in and out in the nest. This is the case in Uccle. Sometimes, it happens that the female does not tolerate the presence of the male in the nest and therefore takes care alone of feeding the chicks. This was the case with the first female that nested at the Cathedral of Saints Michael and Gudula in 2004 and 2005.

The chicks are fed 3 or 4 times a day. Sometimes a little more. In Uccle, the falcons are regulated clockwise. Every morning, around 6:45 am, the female leaves the nest to return quickly with a prey. Video 1 shows the 4 chicks waking up quietly while waiting for their mother's return and the arrival of their breakfast. It's early, so the camera automatically films in black and white. Video 2 shows the next meal. The mother falcon returns with a prey, a Song Thrush. She plucks it for several minutes before giving it carefully to her chicks. At ULB, the cycle is less fixed and it seems that the prey brought in is always almost completely plucked. Photo 1 shows the male who also arrives with a Song Thrush. The feathers that flutter in the wind determine this. Photos 2 & 3 are taken five minutes later. The female feeds her falcon chicks while the male has already arrived with new prey! This time, it’s a Common Sandpiper. The menu of the Peregrines who nest in Brussels is particularly varied. At the cathedral of Saints Michel and Gudula, 65 different species have, since 2004, been listed on the menu of the Peregrine pair! We will talk about it again.

The male from ULB arrives with a Song Thrush.

The female of the ULB feeds her chicks while the male brings a Common Sandpiper. 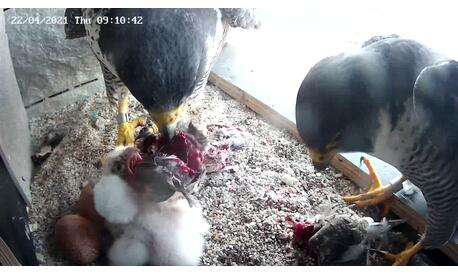 A rare image: the two Peregrine parents (female on the left) of the ULB feed their falcons together.
View the photos in large format
Top