Have you ever heard of Peregrine Falcons caching their prey? Yes, this super predator that is able to grab his prey by stoop diving at 400 km/h, has a habit of going here and there to cache birds it has caught in flight.

You don’t believe it? So read on and above all, take a good look at the photos attached. This is real life! This is happening at Saint Job Church on Sunday 25/04/2021. It is 5:50 p.m. The female Peregrine is perched on the clock’s dial which adorns the bell tower that houses her 4 falcon’s chicks.

Suddenly, she flies away and quickly disappears. She is obviously on the hunt. It's the end of the day, the falcon chicks have yet to receive a last meal before dark. The male Peregrine remains on a church steeple; he does not intervene. At 18:55 p.m., the female returns. Paws empty. She has therefore not captured anything but lands directly at the entrance to her nest (photo 1). She stayed there for several minutes. She then enters the nest and joins the falcons. She comes out quickly. She then lands on one of the brass axes of the clock and looks at Saint Job Square for several minutes (photo 2). And then she takes off, turns around the tower, comes back to the side facade and lands directly at the entrance to one of the putlog holes, a few meters below the nest.

In there it is narrow and deep. The female Peregrine disappears there almost completely (photo 3). We can only see the tip of her protruding tail (photo 4). She seems to be looking for something (photo 5). We guess she has found it! And then, she backs up, she goes out in reverse (photos 6, 7, 8). At one point, she turns or rather tries to turn (photo 9 & 10). Not easy, the hole is so narrow! Finally, she appears in profile with an almost completely plucked prey (photos 11). Probably a thrush. She throws herself into the void, flying round the steeple again and rejoins her brood. It is 7:29 p.m., mealtime for the 4 little falcons (video 1)!

The Peregrine simply went to the fridge to get the evening meal!

Why such a behavior? Obviously in order to be sure to always have food available to feed the falcon chicks. Peregrines are indeed unable to hunt when it rains. Their plumage will get wet, heavier and therefore lose its extraordinary flying abilities. Anticipating for bad days… by stocking prey, is this the Peregrines' strategy? Just like a squirrel hides hazelnuts in order to survive the bad season! But it is radiant weather this Sunday. No question of rain in Brussels for almost 3 weeks. So it is not only in anticipation of adverse weather conditions that you have to be deal with when you are a Peregrine. It is obviously possible at any time to come back empty-paws from a hunt and therefore having a food reserve can be a matter of survival for the young falcons. And in addition, the stored prey is already plucked! All you have to do is to bring it to the nest and feed the falcons. Which is still a famous job. 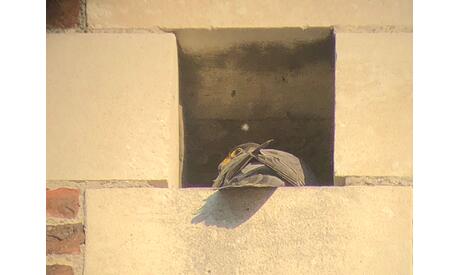 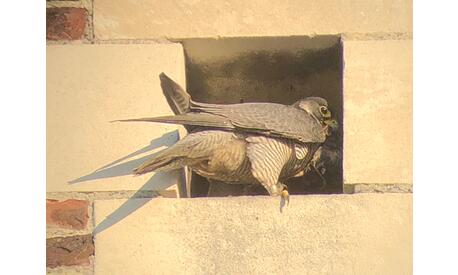 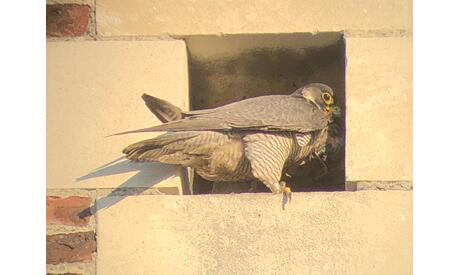 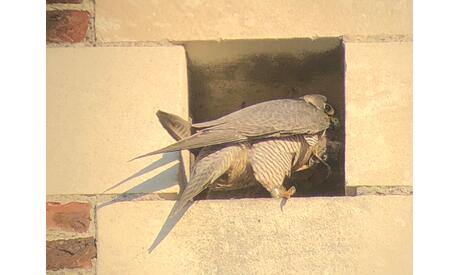 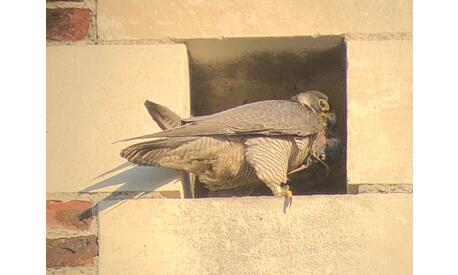 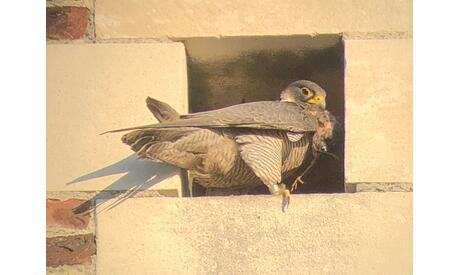 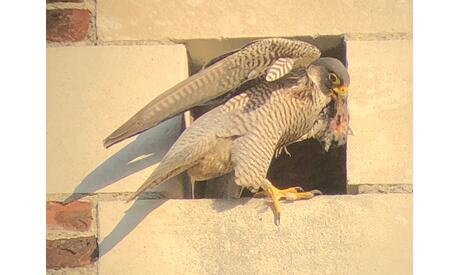