We expected that the juvenile falcons from Uccle would fledge on Monday 24 May. Well, no! The juvenile falcon identified by the black ATP ring has decided to conquer the sky earlier than expected!

But what mechanism therefore triggers the fact for a young bird to suddenly throw itself into the void from a height of several tens of meters while since its hatching, 40 days ago, it is naturally wary of the void??? A young blackbird, a young tit, which leaves its nest has the possibility of fluttering for a few hours or even a few days, from bush to bush, from branch to branch. He/she can therefore build up his wings and familiarize himself with this new means of locomotion which is flight. Even a young Eurasian eagle owl goes through this transitional phase between the moment he leaves his nest and the moment he really sets off into the void! For the Peregrines, it's the big leap! The falcon throws itself into the void and come what may! And it doesn't always go well. The juvenile falcon, ATP, took off well, but it wasn’t ideally. First test Friday: an emergency landing in a nearby garden. And hop, thanks to the reaction of the inhabitants of the sustainable district of Saint Job, it could be recovered and brought back to the top of the bell tower. Today the same fearless again. And… another emergency landing, but this time in the middle of the street, rue du Ham. Yes yes, the street where the tram runs between Saint Job and Fort Jaco. Needless to say, this location is not ideal for exercising your wings ... New intervention from a local resident, one could say a neighbour, of the Peregrine Family. The Royal Belgian League for the Protection of Birds is alerted and immediately organizes the return of the stuntman to his family.

These first failed flights are regular. Falcons never hurt themselves in such circumstances because they do not fall like a stone. They fly, but their first wing beats are, logically, awkward. A gust of wind, poor control of the tail feathers that act as a rudder and it's landing on the ground. Another possibility is poor control of the intended landing at height. The falcon misses the target and only has to plan to the ground. When on the ground, the young falcon does not yet have the muscle power to take off. His parents will not take the risk of coming to feed him on the ground, at least certainly not in town. And of course, they won't be able to lift him up either. The falcon is therefore at the mercy of a fox or ... a tram!

Here, too, the process is part of natural selection. “Gifted” falcons will automatically have a better chance of survival than those with less developed musculature and / or response capacities. The average survival rate of a falcon from the time it leaves its nest until the following year is 60%. In other words, 4 out of 10 falcons will die quickly. Shocking? Yes, when you look at the gross number. But in the end, the most important is the population trend. Is it in decline? Stable? Or dynamic? This is precisely what we are trying to monitor. And the news is good! In Belgium, since the return of a first breeding pair in the Meuse valley in 1994, the Peregrine Falcon population has been dynamic, no doubt about it.

The time of fledgling falcons has therefore started in Brussels. This allows them to be observed "in real life" relatively easily because they are still very dependent on their parents and clumsy when flying. They remain therefore for several days placed on the building that witnessed them to hatch, or in its immediate surroundings. So, use your binoculars and cameras to discover this magnificent bird in Laeken, Watermael-Boitsfort, ULB or Uccle.

When the falcons leave the nest, it is to never come back. We will soon no longer have the opportunity to watch them via streaming media… They will be missed. But we are not there yet. A few more days to enjoy the images!

Video 1. ATP is back among its siblings. Who will be the next to take off? (DV video) 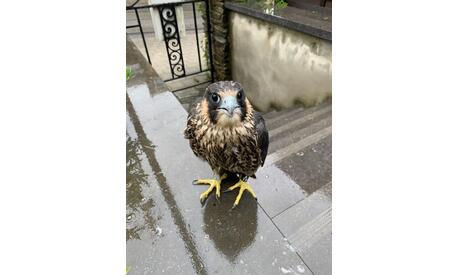 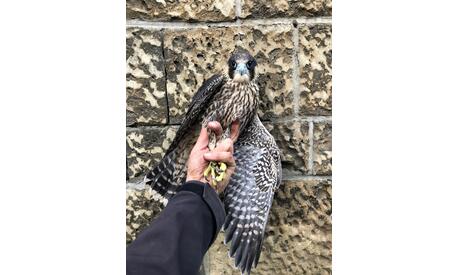 The juvenile falcon, ATP, already back to its nest (photo DV)
View the photos in large format
Top