A new camera was connected this morning to film and broadcast, live and in close-up, the juvenile falcons on the edge of the nest located in the middle of the clock face that adorns the bell tower of Saint Job church of Uccle. The little falcons now spend most of their time there. They scan the sky and discover the neighborhood, including the file in front of the bakery!

But above all, they await the return of their feeding parents. Soon, it’s up to them, to go for a hunt in the Brussels’ sky. That being said, the falcons have been less and less fed by their parents for a few days now. This is probably a behavior that aims to stimulate fledging and certainly also a way to make them lose weight. A good weight /wingspan ratio is essential for a successful flight!

When they hatched almost 6 weeks ago, they weighed about 35 grams. Today, young females weigh around a kilo while their brother weighs around 700 g. In 6 weeks, the weight of the male falcons will have been multiplied by 20 and that of the females by 30!!! But that's not all, because in the meantime, from a cute little white down, they have turned into a magnificent brown plumage edged or streaked with chamois and russet, which will allow them to stoop dive at a speed of almost 400 km/h.

In a few days, a few hours, the falcons will begin to play the balancing act by venturing out the clock face, even the arrows. This will not fail to frighten them off in case they choose the one of the minutes that moves ... every minute! Then, the great flight, the fledging. They will then leave the camera range, but it will be possible to observe them - and to photograph them – because for a few more days they perch on the church or the neighboring buildings. Not to miss!

Photo 1—6: View of the new camera, the female feeds her 3 chicks. 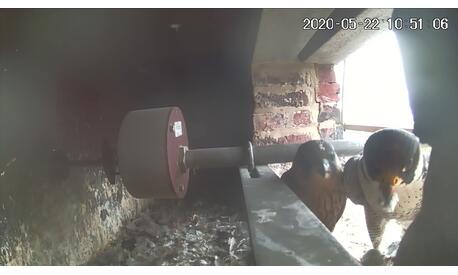 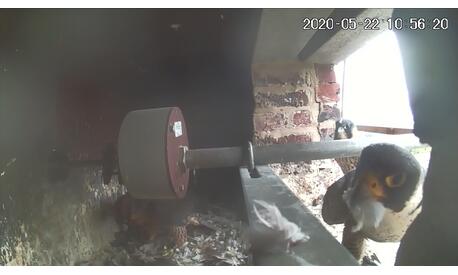 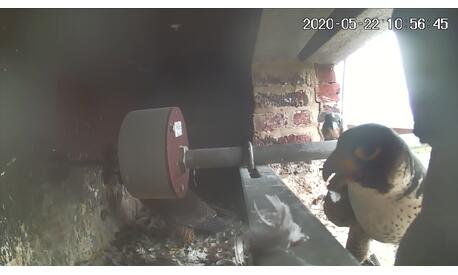 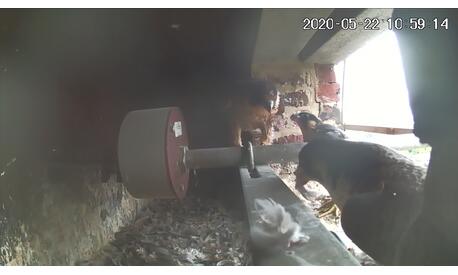 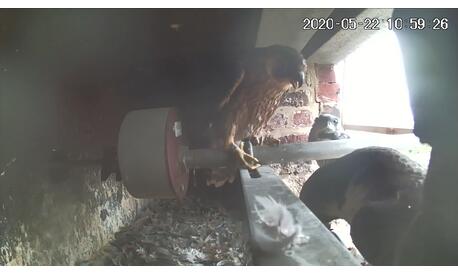 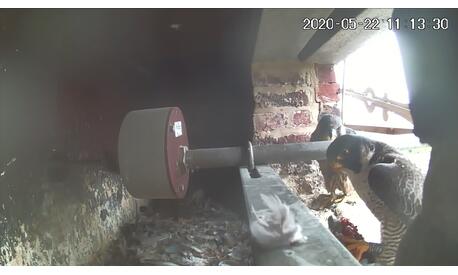