Comparisons are odious. Read the story of an exceptional female Peregrine that nested at the Cathedral of Saints Michael and Gudula from 2006 to 2018.

The first Peregrine Falcon pair have been discovered nesting at the cathedral in mid-March 2004. The female didn’t have a ring. The same year, she raised 3 chicks. In 2005, again a non-ringed Peregrine raised 4 chicks.

At the beginning of the 2006 nesting season, it appears that the female has changed. The one incubating three eggs is ringed. On April 17, 2006, the code for her ring was deciphered. It is a falcon hatched in April 2002 in Herdecke, Germany, 223 km from Brussels!

In early April 2019, the connection of the cameras filming the balcony of the Cathedral where the Peregrines brood, is restored. Surprise, sadness, but ultimately not surprising, it is no longer the female of Herdecke that is in the picture. We think, logically, that at the canonical age of 17 she passed from life to death ... Seventeen years is almost the record of longevity for a wild Peregrine Falcon! The maximum lifespan we know of, relates to a Swedish Peregrine who died after being struck by a car at the age of 17 years and 4 months. This Peregrine female of the cathedral had therefore reached an exceptional age.

This doyenne among the Peregrine Falcons nestled in the cathedral for 13 consecutive seasons. Second exceptional feature! During 13 springs, this falcon laid 54 eggs and raised 42 falcons: 23 males and 19 females. An average of 3.2 falcons per year! This is again exceptional considering that a Peregrine lays a maximum of 4 eggs normally. But that’s not all. This female Peregrine laid 4 times 5 eggs (2010, 2013, 2016, 2018). It’s unheard of, it’s exceptional! In 2018, when she is 16 years old, she still lays 5 eggs. All studies show that fertility decreases in older Peregrines and that older ones simply do not breed anymore. What can I say, this female is simply exceptional!

"Is" exceptional? And yes, she is still alive! In fact, on March 18, 2019, when her nest was already occupied by a new female - the one that nested there this year for the first time - the exceptional Peregrine was found, on the ground, injured, a few hundred meters from the cathedral. The Brussels firefighters carried out the rescue. Diagnosis: dislocated right wing. What's the cause ? A shock with an artifact? A fight with a competitor? The effect of age? We don't know.

Very unfortunately, despite all the efforts made, it was not possible to heal "our" Peregrine so as to release her into the wild. After a period of first aid, she was completely isolated in an aviary so that she did not would get used to men, that she did not tame. She had not to lose her wild instinct, which would have compromised her return to Nature.

Then she molted. It is a crucial period in the life of each bird but particularly of such a raptor. Moult successful! When her plumage was completely renewed, she was trained for weeks in flight, first with a 100m lanyard, then free, but with a GPS transmitter so as to recover her if she ever would fly away… but without really knowing how to fly. Nothing helped. She is capable of launching herself, but over a few hundred meters only and above all, she doesn’t manage to rise, to get high in the sky, high enough to land on the top of a tree for example. Session after session, some progress has been observed, but she fails to recover strength and motor skills in her right wing.

The falcon is therefore now in "resting aviary". Quiet and pampered. She is 18 years old this spring! 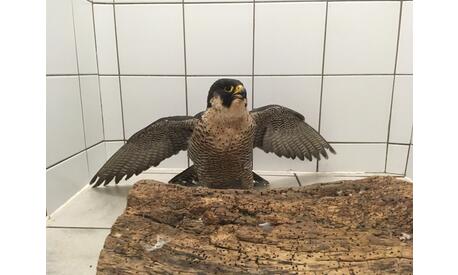 The exceptional Pilgrim shortly after her arrival at the Royal League for the Protection of Birds' revalidation center for animals in Anderlecht (photo DV). 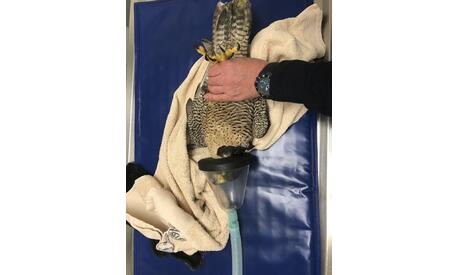 Anesthesia at the veterinary clinic of Dr. Schoffeniels to allow auscultation and radiography (photo DV). 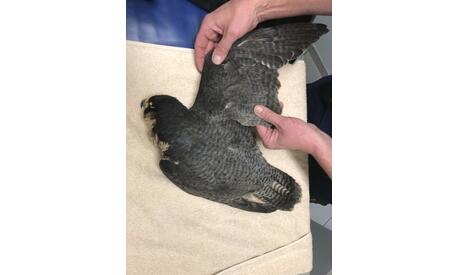 Auscultation of the wing (photo DV). 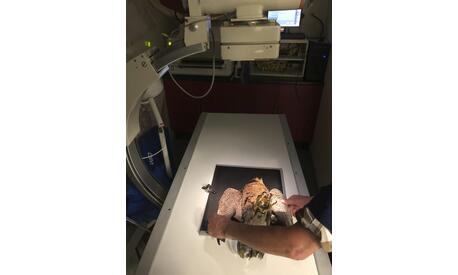 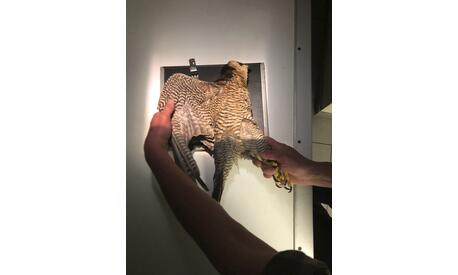 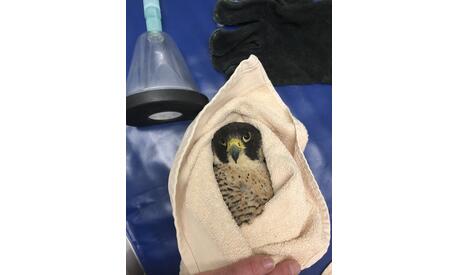 Waking up after anesthesia (photo DV). 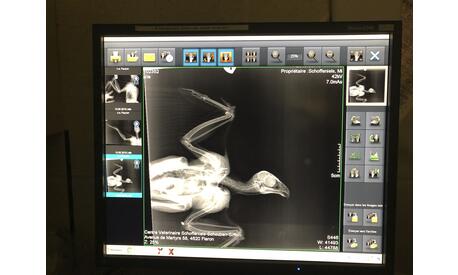 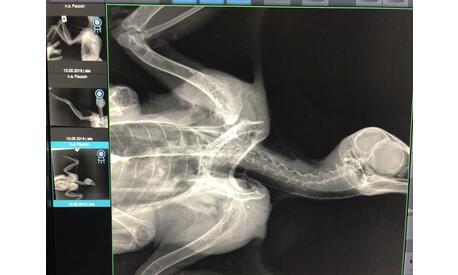 Detail of the X-ray showing dislocation on the right shoulder (photo DV). 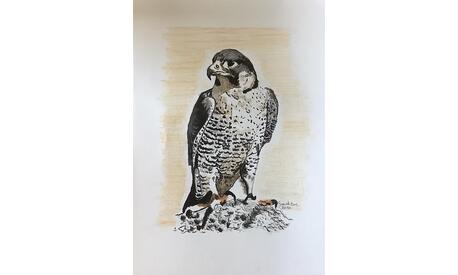 The exceptional Peregine in a drawing of Eric Evrard at Birds Bay, the Hospital for Wild Animals in Ottignies.
View the photos in large format
Top