The four juvenile falcons of Uccle fly! The fourth falcon fledged the day before yesterday.

It is 10h49, the young female has made her decision after one last time observing the ground from her nest. She jumps without hesitation on the minute hand of the clock that frames the entrance to the nest and a second movement throws herself into the void! She's gone! (Video 1). It must be a big surprise to her to be alone in the sky. And it is obviously also a surprise for the falcon mother not to find anyone in the nest as she brings a prey an hour later (Video 2). She apparently did not understand that the nest is empty now. So, she leaves with her piece of passerine bird. It is the end of a chapter, her 4 chicks fledged!

After fledging, juvenile falcons typically do not return to their nests. The live streaming of Uccle will therefore be interrupted soon. Hence, it is possible to observe them discovering a very new environment. They are still very clumsy, but they learn fast. Their survival is at stake.

For a few days, the young falcons - we can no longer call them chicks because they fly! - will fly from chimney to bell, from bell to gutter. So many ideal opportunities to observe them, to photograph them. They are still very silly and may therefore relatively closely observed. Well, they are not fearful.

Rare show, two of them met together this morning on the flat roof of a house bordering the square. Normally, young falcons are quite independent. They move and exercise on their own. But these two stayed for hours together, watching side by side the sky, the passers-by, the church that saw them born, their parents flying hundreds of meters above the neighborhood, or even a plane! The sequence of photos in appendix illustrates this behavior. They are beautiful with their brown, beige, youthful plumage, with some reddish edges.

The two young falcons perched next to each other on the roof of a house in Saint Job Square and are watching the sky. They look left ... (DV photo). 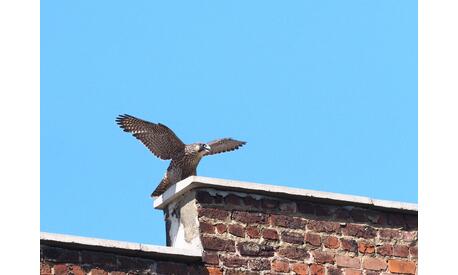 ... ready to take off? It's time to change roofs! (DV photo).
View the photos in large format
Top