Four little falcons at Uccle and two at ULB

Four eggs, four chicks, the Peregrine couple which nest at Uccle confirm their great reproductive dynamism! Since their arrival at the Saint Job Church, the two partners have raised 23 falcons. Almost max. The quadruplets are now almost 15 days old; they have already grown famously. Their weight has been multiplied by 5! (Photo 1)

At ULB, the two Peregrine’s eggs that still need to hatch will not hatch (photo 2). The female will evacuate them soon. She will do so either by pushing the eggs to a corner of the nest or by eating them and then removing the empty eggshells from the nest. This is the third year that this couple is breeding in Brussels. The two partners know each other, they are experienced. In the first year, the female laid four eggs, two of which hatched. The number of eggs laid last year is not known, but three juveniles fledged from the Solbosch campus. This year, there will be two. Or less ... Indeed, even if the survival rate between hatching and fledging is very high in Peregrine falcons, life is a difficult adventure for a wild animal. And mortality can occur at any time. But it is precisely this that it defines as a wild animal, whose evolution we observe from generation to generation, from century to century. The principle: adapt as best as possible to your environment. The survival of your species depends on it.

The day before yesterday, the ULB Peregrine male brought a small passerine bird to the nest, possibly a pipit. The mother offered it to her chicks, as usual in tiny titbits using her beck. Including one big tiny titbit. One of the chicks received a leg at once, from thigh to claw! Take a look at the photos in the appendix (photo 3-6). This time, the leg passed well. But cases of suffocation are known in other countries. Being fatal for the chick. Sad? No, that's Nature! But sad is when someone destroys a biotope, poisons food chains, disrupts the climate. If we observe, monitor, the demography and certain elements of the ecology of the Peregrine Falcons; we do this in order to monitor and understand the evolution of the population in function of the evolution of our environment. 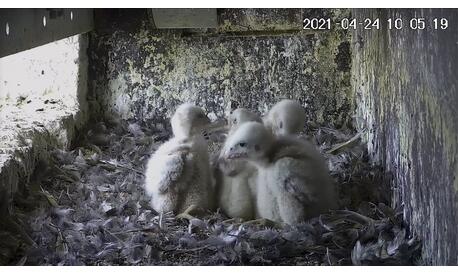 The weight of the falcons in Saint Job's Church has multiplied by 5 since they hatched almost two weeks ago! 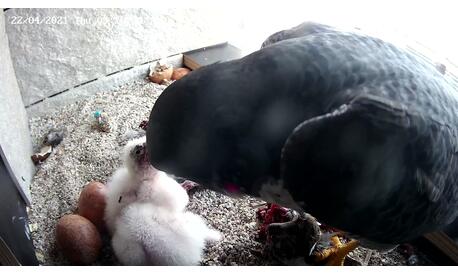 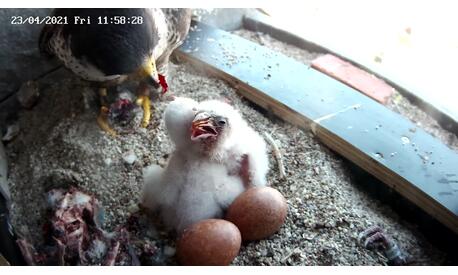 A difficult and… dangerous titbit! (1) 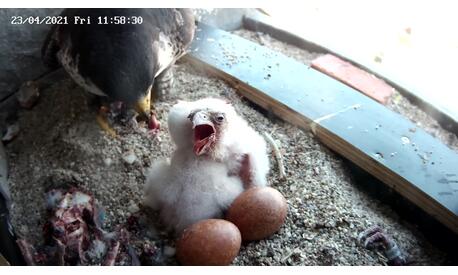 A difficult and… dangerous titbit! (2) 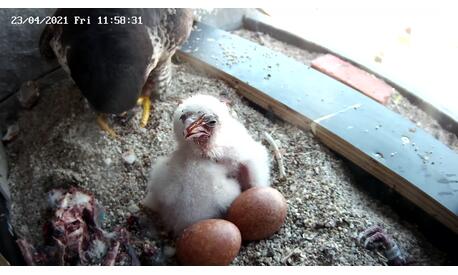 A difficult and… dangerous titbit! (3) 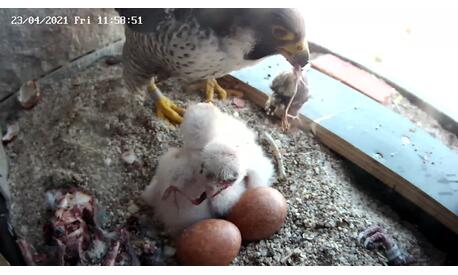 A difficult and… dangerous titbit! (4)
View the photos in large format
Top