In Laeken, in the north of Brussels, the famous Atomium (www.atomium.be) is located, as well as the castle of the Belgian royal family and the Royal Crypt where all the sovereigns of Belgium are buried. But Laeken is also home to a pair of Peregrine Falcons!

The peregrines have been nesting since 2011 in the monumental chapel which overlooks the crypt. Last year this site hit the headlines because the male peregrine was found dead during the nesting period. He was then immediately replaced by an immature male who hatched in Uccle last year (see details here: http://www.falconsforeveryone.be/blog/a-2019-falcon-from-uccle-in-pair-in-laeken?lang=en). But nesting had failed. The female, hatched in April 2014 in Zeeland in the Netherlands, just north of Ghent, has been present in Laeken since spring 2016. She is still the one who broods this spring in the chapel of the Royal Crypt (photo 1).

The above is all interesting, but not really new. What’s up?

The visit organised on site this Sunday always requires a little preparation. The crypt is in fact backed by the Church of Notre-Dame de Laeken, a majestic building which dominates the whole of the north of Brussels. Reaching the chapel requires crossing the attic of the church and then slipping into a narrow passage on the side of the building to finally climb a small ladder specially installed to reach the Peregrine nest. Thank you Priest, thank you to the Church Factory! A magnificent nest of 3 falcon chicks watches the landscape. Magnificent they are, but very small! They are barely 4-5 days old as shown in photos 2-3 in the appendix. It is very rare to see such small falcons as banding is always programmed to happen “at the right time" to band, in this case when the chicks are between 2 and 4 weeks old.

So what explains this gap of more than 3 weeks with the falcons of the Saint Job church? Is it because the male has (again) been replaced? This is indeed the case, but there is no indication that the new one did not arrive several months ago and has therefore not been able to adapt in the meantime.

But look at photo 4 in the appendix! Look in the corner of the nest, behind the chicks! There is down. Full of down. Brown down. Do peregrines protect their eggs with down? No. And yes, there is also a hatched shell remnant! A cream-coloured shell that does not correspond to Peregrine eggs (photo 5). An intruder therefore came to take the Peregrines' nest. We can very reasonably think that the falcons had to wait until their own nest was available again before starting to brood! This would explain the delay and the newly hatched chicks.

And who is this intruder? The colour of the down and the characteristics of the shell fragments determine that it is ... an Egyptian goose (photo 5)! This species, a cousin of the shelducks, somewhat intermediate between ducks and geese, is native to sub-Saharan Africa. The Egyptian goose has been known in captivity for centuries. But, during the 1970s, individuals who escaped from zoos gradually established a new population which now spreads throughout Belgium and Western Europe. The population is particularly dynamic and .. aggressive. The species is indeed extremely territorial, engaging in fights to the death with congeners and other species. We can speak of an invasive or invasive species whose development causes disturbances that we never could imagine ...

The male peregrine of Laeken watches over his chicks (photo DV).

The three 2021 peregrine chicks from Laeken; their body is not yet completely covered with down (photo DV). 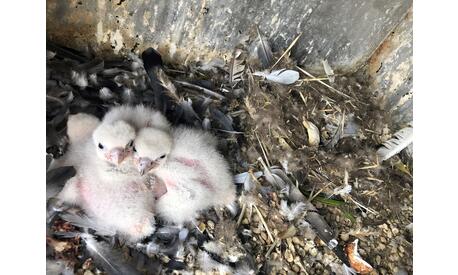 Look in the corner behind the three peregrine chicks (photo DV)! 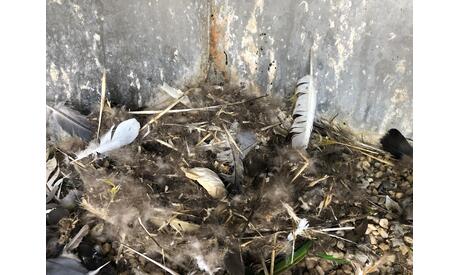 Close-up of the Egyptian goose nest, we can see the typical down and fragments of hatched shells (photo DV). 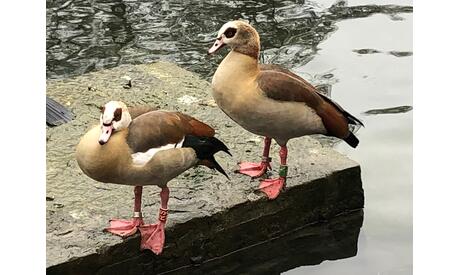