News of other Peregrine pairs living in Brussels

In spring 2019, 14 pairs of Pilgrims were identified in Brussels, i.e. 161 km². Some didn’t nest, but defended a territory, some missed the nesting season, others we might not have seen, but, a density as such is quite exceptional for a city and therefore we can call Brussels "the city of Peregrines"!

The observations of this spring have been limited due to the COVID-19 pandemic. Here are the partial data as available today:

At the Saint Hubert church in Watermael-Boitsfort, the Peregrine pair are brooding or having small chicks. The female’s ring code has been deciphered partially. It is probably the same female as observed in 2018 and 2019. If confirmed, this female had been hatched and ringed in April 2014, in Germany, 188km away.

At the Saint Antoine church in Etterbeek, the couple is brooding or having small chicks. This is the nest where the male, who is currently nesting in Woluwe-Saint-Pierre, is born. The female is not ringed. This has been the case since the first case of nesting observed in 2012. The male of last year was born at the cathedral in 2014. We were not yet able to observe him in detail this year. Therefore, it is unclear whether it is the same male or not.

In the belfry of the town hall of Saint Gilles, there is again incomprehension: the female laid 4 eggs. But they have been abandoned for a few days now. And yet, the pair of Peregrines are still observed regularly perched on the building. The same scenario has been repeated every spring since Peregrines came to the Belfry in 2017. Giving us the slightest suggestion. One certainty: they are not at all disturbed at the top of their breathtaking view spot on Brussels!

On the ULB campus, the Peregrine pair have chicks. Certainly two, maybe more. The parents are the same ones as those observed last year. The male hatched in 2012 at the Notre-Dame church of Laeken. The female was born and ringed at a car manufacturing plant in Dutch Limburg.

Two couples are confirmed in Schaerbeek, one on the City Hall, the other on the tower of the RTBF / VRT boulevard Reyers. In both cases, the falcons have hatched in the past few days. The male from Reyers Tower could be identified. He was born in Saint Hubert church in Watermael-Boitsfort in spring 2014.

At the Notre-Dame church of Laeken, the male was found in perdition at the foot of the building, for an unknown cause, on March 30, he died the next day. He was originally from Olen, in the province of Antwerp, and had been breeding in Brussels since at least 2017. The female was most likely incubating at that time. A few days later, a new male was observed. Is a couple already reconstituted?

To date, we therefore have more or less precise information about 9 nesting sections of Peregrine Falcons in Brussels. The gradual decline of travel restrictions, probably next week, should make it possible for us to complete the list of observations. To be continued ! 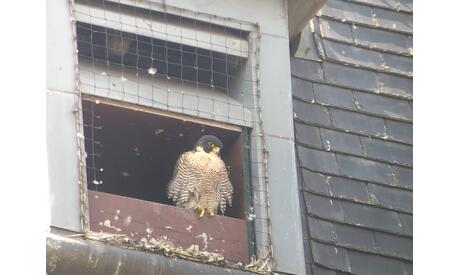 The female of Saint Gilles sitting sitting at the entrance of her nest at the top of the belfry of the town hall (photo DV). 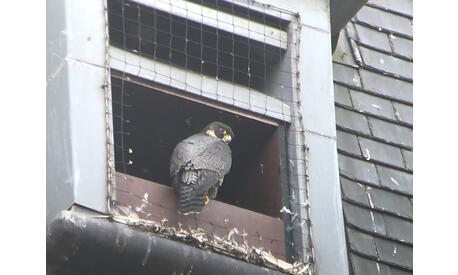 The female of Saint Gilles is about to return to her nest (photo DV). 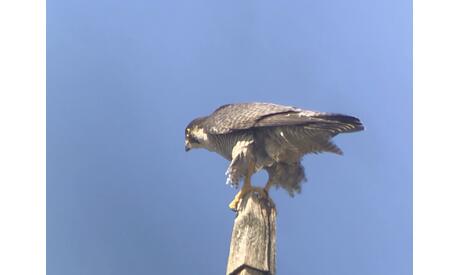 The female of the Saint Antoine church in Etterbeek (photo DV). 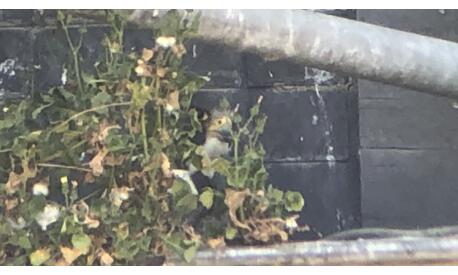 I’ve seen you! The female of the Saint Hubert church in Watermael-Boitsfort hides behind a few tufts of green (photo DV) 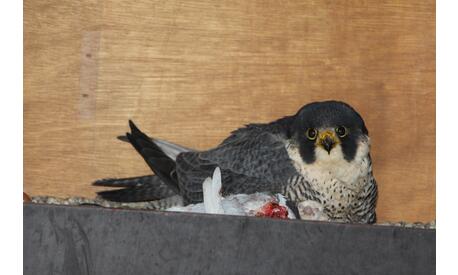