The eagle owl and the peregrine falcon side by side

The eagle owl has several ecological characteristics in common with the peregrine falcon. Both of them are efficient predators, opportunists actually, that feed on a big variety on prey. Both of them used to brood on cliffs. And they both were extinct from the most of Europe at one point. The eagle owl was the first to go, about 100 years ago. They were hunted because hunters saw them as competitors. But they were also killed or captured alive to attract other predators (such as peregrines) in order to kill them. It even went so far that books were written on the subject. The peregrine’s downfall came after the war, due to the development of the chemical industry. Dangerous pesticides ended up in the food chain and ultimately poisoned the peregrine falcons. The result was the same for both species; both of them were extinct throughout the most of Europe. And although humans were at the cause of this, humans also helped the species make their return, by changing legislation that guarantee their protection. Important programs were set up to reintroduce birds bred in captivity to the wild.

But peregrines and eagle owls do differ in size. And an eagle owl is capable of eating a peregrine. He is an apex predator: no other species can capture the eagle owl. The female (who just like in the case of peregrines is bigger than the male) can weigh up to 4 kg. The eagle owl eats almost anything, as long as the prey weighs less than he does. And it doesn’t matter if the prey flies or runs, swims, or has already died. The eagle owl also still needs cliffs to build a nest. Even though this situation might still evolve.

Because of the similarities between peregrines and eagle owls we study the dynamics between both species. The comparisons are very interesting from an ecological point of view and help us to protect these species.

This year, the number of eagle owl couples in Belgium will most likely be more than 100. Most of them live south of the valley of the Samber and Meuse. Since short, two couples also nest in Flanders.

The nests count between 1 and 4 chicks. On average, eagle owls have less chicks than peregrines. They mostly capture black crows and pigeons, including wood pigeons. But when we visit the nests for ringing purposes we also often see rats, hedgehogs and foxes. 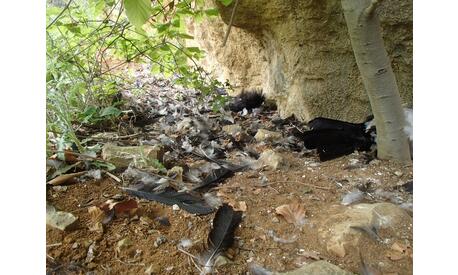 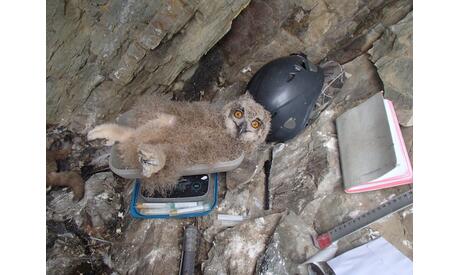 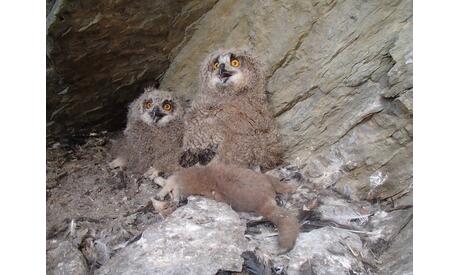