The Peregrines of the Saint Job church of Uccle

In 2015 a pair of Peregrine Falcons nested for the first time in Uccle, one of the 19 municipalities of Brussels.

The male is now 8 years old. He was born and ringed in spring 2012 at the Saint Rombaut Cathedral in Mechelen. The distance between the two sites is 27 km. He is nesting in the heart of the bell tower of Saint Job church initially.

The female that nested in 2015 didn’t have a ring. Therefore, it is not possible to know either her age or her origin. However, the characteristics of her plumage indicate that she must have hatched at least in the spring of 2013. In 2015, she laid 4 eggs and raised 4 chicks. Not bad for a first year!

In spring 2016, the male from Mechelen is back. In fact, he has probably never left. The data we have indicates that Peregrine pairs nesting in Belgium stay in their territory all year round. But there are exceptions, we will mention them later on! He is again paired to a non-ringed female. Is she the same female as the previous year? Maybe, probably. Hence, she was ringed on April 29, 2016, at the same time her offspring was ringed, allowing us to follow her precisely over the next years. In 2016, the couple again raised 4 chicks.

In the spring of 2017, the same pair of Peregrines raised another 4 falcons in Uccle! In three nesting periods, male and female therefore brooded 12 eggs and raised 12 falcons. A total success!

In 2018, the same Peregrines are still present. The female laid 3 eggs. Two hatched on April 12 - we don't know what happened to the third – and fledged on May 22.

In 2019, their rings bear witness to the fact that it is always the same couple that nest in Uccle. The female laid 4 eggs which hatch from April 9th onwards. On May 18, two first falcons successfully fledge. Two days later they are followed by the other two.

Since the arrival of the Peregrine Falons in Uccle in 2015, 18 falcons, 10 males and 8 females, fledged from the bell tower of Saint Job church. The father has always been the same since the initial, while the female has certainly been the same since 2016.

This year, the couple has been incubating 4 eggs since March 11. The incubation lasts 32 days. Hatching should occur around April 11, so just in time for Easter! To be continued ! 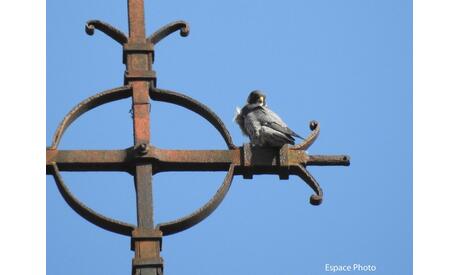 The male Peregrine of Uccle, we can distinguish his ring that makes it possible to determine he was born in Mechelen in spring 2012 (photo Luc Bidaine). 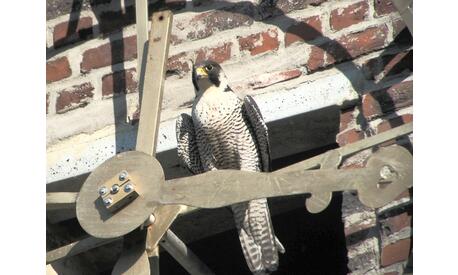 The female Peregrine of Uccle, just after being ringed in spring 2016 (photo DV).
View the photos in large format
Top