The first "certified" sighting of a Peregrine Falcon on the tower of the Woluwe-Saint-Pierre town hall dates from December 18, 2011. And it is not just a sighting because the Peregrine is ringed! Deciphering the code shows he was born in the Saints Michael and Gudula Cathedral of Brussels, in the spring of 2010. The observation of this male will be without a future. At least in Woluwe-Saint-Pierre. Because this Peregrine is then observed at the Saint Hubert Church in Watermael-Boitsfort, another municipality of Brussels. There he nests successfully in 2012 and 2013. And then, incredible but true, this male leaves his nesting site to settle in Grimbergen, just north of Brussels, 16 km away. His female stays nesting at Watermael-Boitsfort. An exceptional case of divorce!

Back to Woluwe-Saint-Pierre: on October 26, 2013; a new male, also ringed, is observed at the top of the tower of the town hall. He is born in spring 2012 in the bell tower of the Saint Antoine Church in Etterbeek. Another Brussels resident. A female joins him quickly, but she is not ringed. Therefore, we cannot know her origin or age.

The latter two do not waste time because in spring 2014, they raise two falcon chicks. The female only laid two eggs, which isn’t much for Peregrines, who lay usually 3 or 4 eggs, and only very (very) exceptionally 1 or 5. But 2 eggs and 2 fledglings, it is a total success.

In 2015, the same male and a non-ringed female raise 3 falcon chicks. Three eggs had been laid. Again, perfect nesting success in Woluwe-Saint-Pierre.

The following year, a non-ringed female laid 4 eggs, she is paired to the same male from Etterbeek, they raise three falcons.

In 2017, we observe in Woluwe-Saint-Pierre the same male and a non-ringed female who lays 4 eggs. The scenario then becomes complicated. Two falcons hatch after 32 days of brooding. But they die within 48 hours. We will never know what exactly happened because the male -  in an extremely surprising behavior -  comes to remove their bodies, one by one, and continues to incubate the 2 eggs which will not hatch in the end. We suspected indirect poisoning by contaminated prey.

The situation returns to normal in the following years: in 2018 the couple raises 3 falcons; and in 2019, 2 falcons - 3 falcons finally, because they also raised a young orphan from the Helmet Church in Schaerbeek (which we put for adoption in Woluwe-Saint-Pierre) in the end. An exceptional story to read here: http://www.falconsforeveryone.be/blog/big-problem-at-schaerbeek-helmet?lang=en

This spring, the confinement rules linked to the covid 19 pandemic somewhat disrupted the start-up of the Woluwe-Saint-Pierre nest registration and connection system. It is therefore unclear when the Peregrines started to incubate the eggs. It is therefore not possible to assess the expected date of hatching. We do know, however, that the male is still Etterbeek's. He will be 8 years old this spring. His female is always non-ringed. We can assume that she is there since the first nesting in 2014. But it is also possible that she was replaced by another non-ringed female.

Video 1: The female Peregrine off Woluwe-Saint-Pierre relays her male to incubate the eggs 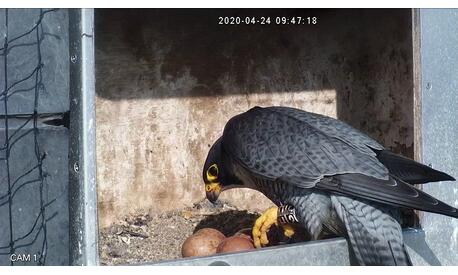 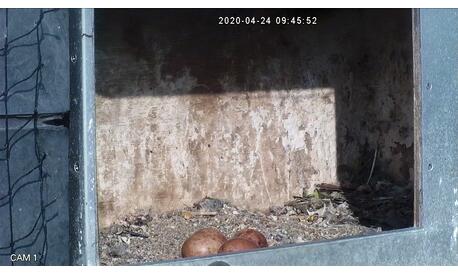