Three chicks have hatched at the Saint Job Church in Uccle

A first Peregrine Falcon of the 2020 generation hatched in the early evening of Monday, 13 April, at the Saint Job Church of Uccle. This Tuesday 14th must have been exciting, and it was! Here is the film.

A first feed is observed from 7:46:50 a.m. onwards. The female Peregrine raises herself up and we see two eggs and two falcon chicks. A second chick must have been born during the night because its down is dry, like that of the older one. The male brings in an unidentified prey, hence, it certainly is a passerine bird. He gives it directly to his female who feeds her two chicks for about ten minutes.

10:24 a.m., the female waddles on her nest. Under her right wing, we distinguish an empty eggshell. A third falcon hatched! She then turns, faces the camera and shows the newly hatched chick, it is still wet. It must have hatched only some seconds before. It wobbles from right to left. We can see, very briefly, that the fourth egg is cracked too. The female quickly goes back to cover her three chicks to keep them warm. She then shows a classic - but always surprising- behaviour: she grabs a piece of eggshell that is in front of her and begins to eat the remaining membranes and tissue still inside. Obviously, it must be a particular source of energy!

He returns at 01:51 p.m. and this time relays the female. He incubates the 3 chicks and the hatching egg until 03:34 p.m. The female then returns to the nest. The male goes away.

04:43 p.m., rare observation: the father and the mother Peregrine falcon feed their 3 falcons at the same time. Normally, they do it in turn. After 10 minutes, the male leaves the nest and takes with him the carcass of the passerine they devoured.

07:55 p.m., the male brings a new prey. The female takes it. In the low sun, she feeds her three chicks before dark. At 8:06 p.m., they are sated and fall asleep. She leaves the nest for a few moments. The male takes the opportunity to come and see his offspring. He lies down on the sleeping chicks but the female arrives after a few seconds and resumes incubation for the night.

The fourth falcon has not yet hatched. Patience!

the male and his 3 chicks. 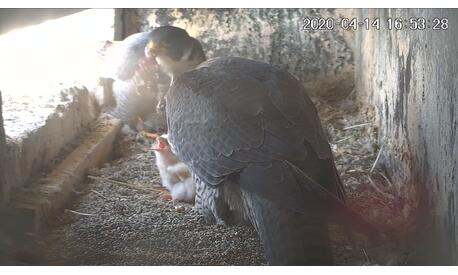