Here is the start of a fifteenth spring of Peregrine Falcon Observation in Brussels!

The period is obviously special since confinement is essential to protect us from the Covid-19 virus. The organization of the program is therefore a little complicated. It is, for example, obviously not possible to install the famous Observation Post on the forecourt of the Cathedral of Saints Michael and Gudula. Nor is it possible to prospect and observe all known nesting sites in Brussels and beyond.

But there is good news! A couple nests again at the top of the north tower of the Cathedral of Saints Michael and Gudula, in the heart of Brussels. The two partners are ringed. She was born in April 2016 in a nest box installed on a cooling tower of the Frimmersdorf thermal power station, a few km west of Cologne (Germany) and 160 km from Brussels. The previous female who raised a record 46 falcons at the cathedral between 2006 and 2018, also originated from Germany. He was born in April 2017 at the top of the spire of the Saint Guidon collegiate church, a few hundred meters from the Astrid Park in Anderlecht.

The two partners have already been observed at the cathedral during last spring. But they ultimately didn't nest. They are therefore inexperienced; this will be their first nesting! We cross fingers. The fact remains that since March 17, they have been incubating 4 magnificent eggs. It’s a good start.

We invite you to observe this new family together thanks to a brand new 4G connection system!

At the Saint Job Church in Uccle, male and female Peregrine are also ringed. He hatched in the Saint Rombaut Cathedral in Mechelen in April 2012. On May 10, 2014, however, a passenger finds him on the ground, between the rails of the tram that crisscrosses Uccle and takes him to the Revalidation Centre for Birds and Wild Mammals in Anderlecht. Quickly getting better, he is then released on June 25 of the same year. Oh surprise, on March 24, 2015, he is back in Uccle! He there found a partner and began a first nesting season at the Saint Job Church. She was not ringed when we first observed her, but we ringed her in May 2016, at the same time as her falcons. This couple is particularly productive. The female has laid 4 eggs every spring since 2015 and has raised a total of 18 falcons. This pair of Peregrines is therefore particularly experienced; incubation started on March 10.

A couple also nests on the whole of the Woluwe-Saint-Pierre town hall, but the confinement procedures do not allow, for the moment, to establish the connection with the camera which films the nest. We don’t lose hope, it will work!

Video 1. The cathedral of Saints Michael and Gedula:  the new female Peregrine Falcon is incubating the eggs since March 17. 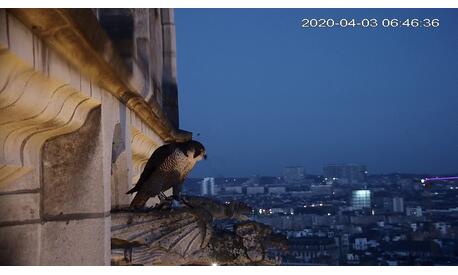 Awakening of Brussels Capital: the view of the Peregrine Falcons from the top of the Saints Michael and Gedula Cathedral. 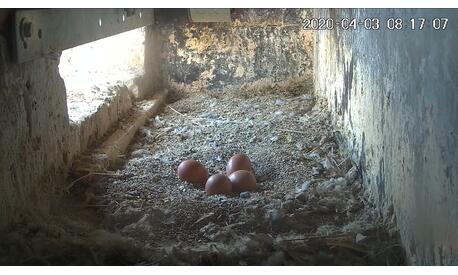 The female Peregrine of the Saint Job Church of Uccle has laid four eggs again. 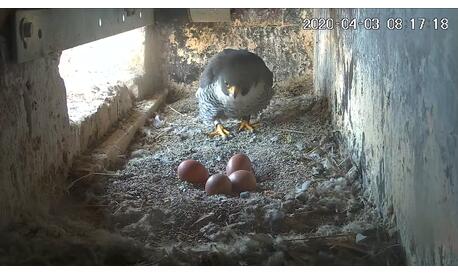