Falcons in the cathedral

At the end of the nineties, Brussels ornithologists discovered a couple of peregrine falcons hibernating on top of the towers of the St. Michael and St. Gudula Cathedral in the centre of Brussels. In 2001, ornithologists of the Royal Belgian Institute of Natural Sciences (RBINS) in association with the Fonds d’Intervention pour les Rapaces installed a laying-nest on the edifice in an attempt to encourage nest-building. This laying-nest was never used, but in the spring of 2004, a pair of falcons nested on a balcony on top of the cathedral’s northern tower. At the beginning of March, the female laid three beautiful eggs. According to the ornithologists, this was the first time that this magnificent bird nested in Brussels.

As a result of watching the three chicks perform acrobatic feats on the cathedral’s gargoyles at the end of May 2004, the project “Falcons for everyone” was developed by the RBINS in association with the Commission Ornithologique de Watermael-Boitsfort. Thanks to the project the general public can now  enjoy this display of  nature’s beauty in an extraordinary setting for the seventh year in a row.

For whom and how?

The principle of the project is easy: enable large and small, commuters and townspeople, keen amateurs and day trippers to watch the pair’s nidification develop in detail. Every spring, in April and May, the public is invited to discover the falcons’ secrets thanks to two small cameras placed in the nest at a distance of a few inches from the eggs. The images are transmitted to screens that are put up behind the windows of an observation post, which is placed on the forecourt at the foot of the cathedral.

A spectacle of falcons

It is a complete spectacle: it takes place at a height of 50 metres, balancing on the balcony, as if you were really up there. You watch the first cracks appearing, the tip of a beak that breaks through the brick-red eggshell… The eggs are hatching and suddenly you hear the chicks’ first peeps. Meanwhile, their father has just captured a pigeon high up in the air by colliding with the bird at full speed. Now he approaches the cathedral and passes the prey to the female, who has been waiting on the edge of the nest. She returns to her downy chicks and very cautiously folds her talons inwards so that she won’t harm them. One by one she carefully feeds her hungry little ones a mouthful. The young grow and their plumage develops day by day. When they are about six weeks old, the great day dawns: after having performed several acrobatic feats between the gargoyles and the cathedral’s balconies, the young falcons throw themselves into the air and discover something new: the immensity of the sky.
Soon they will fly hundreds of metres above the ground, only to suddenly swoop on a prey at a dizzy speed. Peregrine falcons are namely capable of stooping at a speed of 250 mph (400 km/h)! The peregrine masters the sky better than any other bird.

In addition to introducing the falcons to the public at large, the project “Falcons for all” also aims to show that actions for nature conservation really have an effect. As a matter of fact, the peregrine had nearly vanished from Europe during the twentieth century. Pesticides contaminated its prey, the consumption of which poisoned the adults and their eggs. These chemical substances have been prohibited since the seventies and a European Directive guarantees the protection of wild birds on the European Union’s territory. Thanks to these actions, the first pair of peregrine falcons returned to nest in Belgium from 1994 onwards. Today, there are over 80 nest-building couples!

In the past, only a couple of specialists in the world worried about the disappearance of the peregrine falcon. Today, however, the falcon’s return delights thousands of people in Belgium and elsewhere. The project “Falcons for all” is a nice example of a collaboration between a scientific institute and an association for conservation, of a partnership with a Region, a City, religious authorities, and private companies. And it allows passers-by to discover a nature that looks extraordinary, even in the city.

Between 2004 and 2019, 50 young falcons fledged from the St. Michael and St. Gudula Cathedral, while over a 140,000 people came to discover these magnificent birds on the spot. 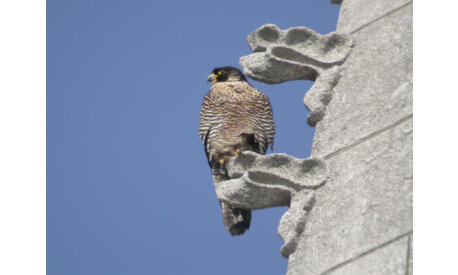