Brussels, the Capital of Peregrine Falcons!

A pair of Peregrine Falcons have established their nest in the heart of Brussels, on one of the towers of St. Michael and St. Gudula's Cathedral, a stone's throw from the famous Grand Place! This inescapable monument of the Belgian Capital has been a home to these birds of prey since 2004.

It is unheard of in Brussels' living memory! The bird had completely disappeared from Belgium, and most of Europe, hunted by poachers and poisoned by pesticides. It has returned to nest in the heart of the city, in among the people. And it has been so well received that there are now no fewer than 14 pairs in the city. What a symbol!

Boasting exceptional cultural heritage and a multicultural fabric, Brussels is made up of various neighbourhoods where even falcons have made a home. In addition to chocolate, beer or even the Grand Place, these Peregrine Falcons offer tourists and passers-by a taster of spring in Brussels. The arrival of young falcons is expected each year, symbolising the return of good weather to the capital.

Unfortunately in the Covid-19 crisis that we are going through, it is currently impossible to come and discover them from the Observation Post settled normally in the cathedral square. However, to somewhat escape the rigors of confinement, I invite you to take advantage of the benefits of technology, by connecting to the cameras which broadcast in live streaming HD images of the privacy of the nest of these fabulous birds. What a show !

I have no doubt that thanks to the responsible behaviour of everyone and thanks to the medical teams who demonstrate exemplary courage, we will be able to enjoy this spectacle under the usual conditions and this in the best but nevertheless prudent times. As soon as this crisis will be forgotten you will be able to combine your visit to the Peregrine Falcons with a visit to the the historic heart of Brussels with its boutiques, diverse shops, bars, brasseries, not forgetting the inescapable Manneken Pis who will undoubtedly appear smaller than what you had imagined.

Visiting on foot, or by bus or tram, you can discover other pleasant neighbourhoods in Brussels, including Sablon, the Royal Palace and the Marolles quarter. To the north, the famous Atomium offers a breathtaking view of the city and unforgettable memories of your Brussels experience.

Mayor of the City of Brussels 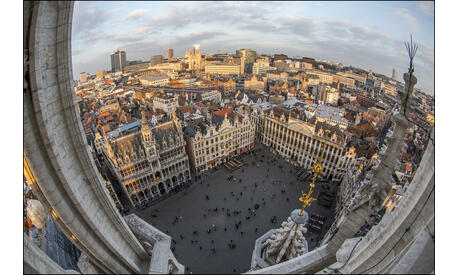 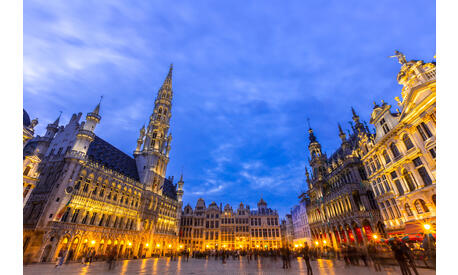 10/06
The ULB falcon chicks have been ringed
It was ringing day on June 10 at the top of the tower of the Literature & Philosophy building of the Solbosch campus of the University of Brussels (ULB).
06/06
A flying juvenile falcon in Woluwe-Saint-Pierre.
The 4 juvenile falcons in the tower of the Woluwe-Saint-Pierre city hall were hatched on 1 May. They should therefore fledge around next Sunday, June 12th.
30/05
Moving ending of the nesting period in Uccle
In Uccle, the end of nesting was eventful. During the observation session on Sunday May 22, none of the (many) observers and photographers present managed to spot the 4 juvenile falcons at the same time. Same with the camera.
Top